The membranes used for reverse osmosis have a dense barrier layer in the polymer matrix where most separation occurs. In most cases the membrane is designed to allow only water to pass through this dense layer while preventing the passage of solutes (such as salt ions). This process requires that a high pressure be exerted on the high concentration side of the membrane, usually 2–17 bar (30–250 psi) for fresh and brackish water, and 40–70 bar (600–1000 psi) for seawater, which has around 24 bar (350 psi) natural osmotic pressure which must be overcome.

This process is best known for its use in desalination (removing the salt from sea water to get fresh water), but has also purified naturally occurring freshwater for medical, industrial process and rinsing applications since the early 1970s

In reverse osmosis, in a similar setup as that in osmosis, pressure is applied to the compartment with high concentration. In this case, there are two forces influencing the movement of water: the pressure caused by the difference in solute concentration between the two compartments (the osmotic pressure) and the externally 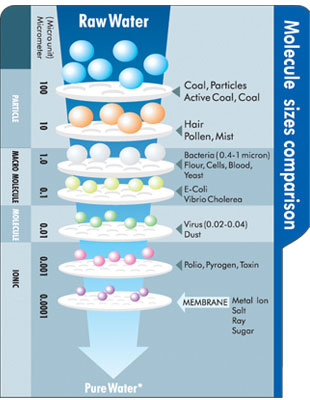 In the United States, household drinking water purification systems, including a reverse osmosis step, are commonly used for improving water for drinking and cooking.

Such systems typically include four or five stages:

In some systems, the carbon pre-filter is omitted and cellulose triacetate membrane (CTA) is used. The CTA membrane is prone to rotting unless protected by the chlorinated water, while the TFC membrane is prone to breaking down under the influence of chlorine. In CTA systems, a carbon post-filter is needed to remove chlorine from the final product water.

Portable reverse osmosis (RO) water processors are sold for personal water purification in various locations. To work effectively, the water feeding to these units should best be under some pressure (40psi or over is the norm). Portable RO water processors can be used by people who live in rural areas without clean water, far away from the city’s water pipes. Rural people filter river or ocean water themselves, as the device is easy to use (Saline water may need special membranes). Some travelers on long boating trips, fishing, island camping, or in countries where the local water supply is polluted or substandard, use RO water processors coupled with one or more UV sterilizers. RO systems are also now extensively used by marine aquarium enthusiasts, as the domestic water supply contains substances that are extremely toxic to most species of saltwater fish. In the production of bottled mineral water, the water passes through a RO water processor to remove pollutants and microorganisms. In European countries, though, such processing of Natural Mineral Water (as defined by a European Directive) is not allowed under European law.(In practice, a fraction of the living bacteria can and do pass through RO membranes through minor imperfections, or bypass the membrane entirely through tiny leaks in surrounding seals. Thus, complete RO systems may include additional water treatment stages that use ultraviolet light or ozone to prevent microbiological contamination.)

Rain water collected from storm drains is purified with reverse osmosis water processors and used for landscape irrigation and industrial cooling in Los Angeles and other cities, as a solution to the problem of water shortages.

In industry, reverse osmosis removes minerals from boiler water at power plants. The water is boiled and condensed over and over again and must be as pure as possible so that it does not leave deposits on the machinery or cause corrosion. It is also used to clean effluent and brackish groundwater.

Reverse osmosis product can be used for the production of deionized water.

In July 2002, Singapore announced that a process named NEWater would be a significant part of its future water plans. It involves using reverse osmosis to treat domestic wastewater before discharging the NEWater back into the reservoirs. [1]

In addition to desalination, reverse osmosis is a more economical operation for concentrating food liquids (such as fruit juices) than conventional heat-treatment processes. Research has been done on concentration of orange juice and tomato juice. Its advantages include a low operating cost and the ability to avoid heat treatment processes, which makes it suitable for heat-sensitive substances like the protein and enzymes found in most food products.

Reverse osmosis is extensively used in the dairy industry for the production of whey protein powders and for the concentration of milk to reduce shipping costs. In whey applications, the whey (liquid remaining after cheese manufacture) is pre-concentrated with RO from 6% total solids to 10-20% total solids before UF (ultrafiltration) processing. The UF retentate can then be used to make various whey powders including WPI (whey protein isolate) used in bodybuilding formulations. Additionally, the UF permeate, which contains lactose, is concentrated by RO from 5% total solids to 18-22% total solids to reduce crystallization and drying costs of the lactose powder.

Although use of the process was once frowned upon in the wine industry, it is now widely understood and used. An estimated 60 reverse osmosis machines were in use in Bordeaux, France in 2002. Known users include many of the elite classed growths (Kramer) such as Château Léoville-Las Cases in Bordeaux.

Reverse osmosis is used globally throughout the wine industry for many practices including wine and juice concentration, taint removal; such as acetic acid, smoke taint and brettanomyces taint; and alcohol removal. The patent holder for these processes, Vinovation, Inc., claims to have served over 1000 wineries worldwide, either directly or through one if its licensed partners, in the last 15 years. Its use has become so widely accepted that patent infringers have sprung up on several continents.

Because of its lower mineral content, RO water is often used in car washes during the final vehicle rinse to prevent water spotting on the vehicle. RO water also enables the car wash operators to reduce the demands on the vehicle drying equipment.

Starting in the 1970s, some maple syrup producers started using reverse osmosis to remove water from sap before being further boiled down to syrup. The use of reverse osmosis allows approximately 75–80% of the water to be removed from the sap, reducing energy consumption and exposure of the syrup to high temperatures. Microbial contamination and degradation of the membranes has to be monitored.

For small scale production of hydrogen, reverse osmosis is sometimes used to prevent formation of minerals on the surface of the electrodes and to remove organics and chlorine from drinking water.

Many Reef Aquarium Keepers use Reverse Osmosis for their artificial mixture of seawater, In fact pure fresh water is the only substitute for evaporated water in reef aquariums. Therefore, each and every aquarist should use only purest from of water. Water from water tap often is contaminated & contains excessive chlorine, chloramines, copper nitrates, phosphates, silicates besides, many other harmful chemical that are also found in tap water making it more vulnerable to many life forms in reef aquarium. An effective combination of both Reverse Osmosis & De-ionization (RO/DI) is considered to be the most popular amongst Reef Aquarium Keepers above other water purification processes as its convenient method with low cost of ownership and minimal running costs

Desalination refers to any of several processes that remove excess salt and other minerals from water in order to obtain fresh water suitable for animal consumption or irrigation, or, if almost all of the salt is removed, for human consumption. Sometimes the process produces table salt as a by-product. Desalination of ocean water is practiced in many regions that have scarce natural freshwater supplies; it is widespread in the Middle East and the Caribbean, and is increasingly used in parts of the United States, North Africa, Singapore, Spain, Australia, China and now in INDIA. It is also used on many ships and submarines.

Desalination typically requires large amounts of energy as well as specialized, expensive infrastructure, making it very costly compared to the use of fresh water from rivers or wells (bores). The large energy reserves of many Middle Eastern countries have allowed for desalination to be employed relatively cheaply. Saudi Arabia’s desalination plants account for about 24% of total world capacity. The world’s largest desalination plant is the Jebel Ali Desalination Plant (Phase 2) in the United Arab Emirates. It is a dual-purpose facility that uses multi-stage flash distillation and is capable of producing 300 million cubic meters of water per year

The two leading methods were reverse osmosis (47.2% of installed capacity world-wide) and multi-stage flash (36.5%).The traditional process used in these operations is vacuum distillation—essentially the boiling of water at less than atmospheric pressure and thus a much lower temperature than normal. Due to the reduced temperature, energy is saved.

In the last decade, membrane processes have grown very fast, and reverse osmosis has taken nearly half the world’s installed capacity. Membrane processes use semi-permeable membranes to filter out dissolved material or fine solids. The systems are usually driven by high-pressure pumps, but the growth of more efficient energy-recovery devices has reduced the power consumption of these plants and made them much more viable; however, they remain energy intensive and, as energy costs rise, so will the cost of reverse osmosis water.

Forward osmosis employs a passive membrane filter that is hydrophilic and slowly permeable to water, and blocks a portion of the solutes. Water is driven across the membrane by osmotic pressure created by food grade concentrate on the clean side of the membrane. Forward osmosis systems are passive in that they require no energy input. They are used for emergency desalination purposes in seawater and floodwater settings